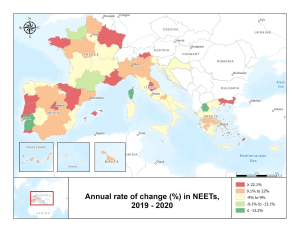 In the article under the title ‘A Crisis within a Crisis: The Footprint of COVID-19 on Youth Employment in Mediterraean EU’ published in the 17th issue of the Youth Employment Magazine, the magazine of the Fund for Youth Employment of the EEA and Norway Grants, Dr Kostas Gourzis made an extended reference to the [e-Aegean] ResLab Observatory. Read the full article here:

First documented in China in late 2019, COVID-19 is a highly infectious disease that quickly left its initial enclaves, developing into a pandemic and a severe health crisis. As of mid-March 2022, almost 460 Million infections have been recorded globally, resulting in more than 6 million deaths.1 Most states have resorted to drastic measures to curb the virus’s spread, including national curfews, general confinement of the population and suspension of nonessential economic activities (Kapitsinis, 2021). However, these interventions have caused severe economic and social hardship, stripping millions of people of their social networks and contributing to extensive layoffs. As entire economies grinded to a halt, OECD (2021) documented that unemployment in 2020 was 6.5% as opposed to 5.5% in 2019. The EU, to mitigate the looming recession, has implemented a policy of “injections” of liquidity with support measures for workers and businesses. However, in spite of estimates predicting that employment rates will return to 2019 levels within 2023, the overall impact of the pandemic is still unclear. Certain aspects are particularly worrying, such as the pandemic’s impact on young people who are not in employment, education or training (NEETs in short).

Previous EEA and Norway Grants-funded projects have studied the spread of the pandemic: data from the “e-ResLab Aegean” Observatory2, a spinoff of the YOUTHShare project, verify that the spread followed global economic ‘pipelines’ (Adler et al., 2021). As such, metropolises were exposed to the virus before peripheral regions, with spikes of infections being located in areas that are permeated by flows of finance, commodities, and people. In 2020, a notable cluster in the Mediterranean EU extended from north-eastern Spain to northern Italy, passing through south-eastern France. As becomes evident, geographical proximity played a key role in contagion patterns, as the aforementioned cluster forms a continuous, “banana-shaped” zone. However, over time new spikes expanded this cluster and contagion eventually covered most South EU regions. In this expansion, a variety of factors weighed in. For instance, the policies implemented by regional and national governmental bodies, the preparedness of health systems and vaccination coverage rates, a region’s position within wider production networks, its demographic and geographic characteristics, etc. The above reveal that pandemics constitute complex socio-spatial phenomena of extremely uneven dynamic, a fact that is also reflected in mortality rates. In total, up to mid-March of 2022 the eight countries of the area (Portugal, Spain, France, Malta, Italy, Croatia, Greece, Cyprus) have recorded more than 55 million cases and 460 thousand deaths from COVID-19.

But while the above gruesome figures refer mainly to older, often unvaccinated, people, the socio-economic impact of the pandemic seems to ‘favour’ the younger ones. For the latter, labour market conditions have become significantly worse. In particular, the share of those who are out of work, education, and training has increased; and this comes in addition to precarious labour arrangements such as non-voluntary part-time and temporary employment. Map 1, which shows changes in NEET rates between 2019-20, reveals that these vulnerable individuals multiplied in a wide variety of regions, including those over-dependent on tourism (e.g., South Aegean in Greece and the Balearic Islands in Spain), as well as regions lagging behind economically (e.g., Bretagne in France, Eastern Macedonia and Thrace in Greece).

The pandemic found the Mediterranean part of the EU in a particularly vulnerable state, well into the tenth year of an economic crisis, and new recessionary tendencies culminating. As such, the health crisis caused by COVID-19 was combined with, and reinforced the existing economic recession (Leach et al. 2021). At the same time, most measures that were taken to support employment have been extremely short-sighted and implemented in a geographically insensitive way (ESPON, 2020). As a result, Mediterranean EU countries struggle more than those of the EU core, whilst within them, some population segments (e.g., women, the youth, and immigrants) struggle more than the rest. Under the shadow of a multifaceted crisis, it will take a great effort to revert the strong tendencies of polarisation (Stevano et al. 2021). Ultimately, the lessons learned during the current pandemic might prove even more invaluable, considering the increasing frequency of health crises within a context of deteriorating human-nature relations (WHO, 2018).

The above analysis takes on a particular significance within the current conjuncture as another crisis, this time stemming from the geopolitical destabilisation in Ukraine, has caused severe inflation pressures on food and energy that (once again) affect the most vulnerable.

Herod, A., Gialis, S., Psifis, S., Gourzis, K., & Mavroudeas, S. (2022). The impact of the COVID-19 pandemic upon employment and inequality in the Mediterranean EU: An early look from a Labour Geography perspective. European Urban and Regional Studies, 29(1), 3-20.

From periphery to centre stage:
The [e-Aegean ResLab Observatory] and visualised information in labour geography

The [e-Aegean] ResLab Observatory featured at the 17th issue of the Youth Employment Magazine, the magazine of the Fund for Youth Employment of the EEA and Norway Grants. Read here the article in detail:

The [e-Aegean] ResLab Observatory featured at the the
Among the developed societies of the global North, the concept of information has had a central role already since the ‘70s. Imaginative descriptions, such as “the new means of production”, and analytical approaches such as Alain Touraine’s Programmed Society confirmed information’s place at the centre of social developments. There it was combined with another important trend of the time: the image as an element of social dialectics.
In this context, visualised information becomes much more than a simple infographic. New technologies, like knowledge graphs, are analytic tools that provide links between variables combining big data, specialised closed system information, semantics, and other technologies and knowledge bases.
The development of social sciences toward multi-factorial analytical explanations has rendered visualised information indispensable. Labour studies are a case in point; a more than century old field of research, with long time series of comparable data, and extensions that reach beyond economics, covering political economy, sociology, psychology and other sciences. Labour geography, concerned with the role of space in labour relations, is one of these sciences.
This is precisely the service offered by the multidisciplinary team of the Labour Geography Research Laboratory’s [e-Aegean] ResLab Observatory, under the scientific direction of Associate Professor Stelios Gialis.
As a response to the necessity for meaningful and insightful data on the impact of COVID-19 pandemic, the YOUTHShare project produced the e-observatory. Dynamic graphs and maps provide an interactive presentation of labour and unemployment data from Greece, Cyprus, Malta, Italy, Croatia, Spain, France, and Portugal. The temporal axis of yearly variation, and most importantly the geographic perspective on the regional level, are used to analyse variables concerning the general economy, but also specialised sectors; special vulnerable groups, such as those Not in Employment, Education or Training (NEETs); the spread of the COVID-19 pandemic and the impact of relevant restrictions and more.
Based on open and reliable data from National Statistical Agencies and EUROSTAT Labour Force Survey, the e-observatory is already recording the volatile conditions in peripheral labour markets. The visualisation of complex indices allows spatiotemporal comparisons that confirm the prevalence of trends such as labour flexibility and precariousness, while illuminating specifically local aspects, such as their connection to tourism-reliant economies. Further regional analyses demonstrate trends such as the uneven impact of the pandemic on insular regions where employment has taken a comparatively harder blow, even though the number of infections has been relatively low.
These processes allow the aggregation of separate indices into composite central ones, such as regional resilience, but also the viewing of regions within international production networks. As a point of data collection and analysis, and as a centre for visualised information, the e-observatory constitutes a valuable tool for regional development policy development. 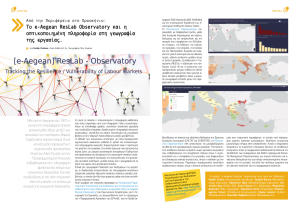 The e-ResLab Aegean is being developed in the framework of the Regional Excellence Support program of the Competitiveness, Entrepreneurship and Innovation framework program as a sub-project, under the title e-Aegean Data Services [Inter-regional Data Network Centre] of the wider e-Aegean R&D Network project [Network for Research and Technology of the Aegean Archipelago: Regional Innovation, Entrepreneurship and Excellence Support].

© 2022 All Rights Reserved | Powered by Wordpress | Made with ❤ by Themely